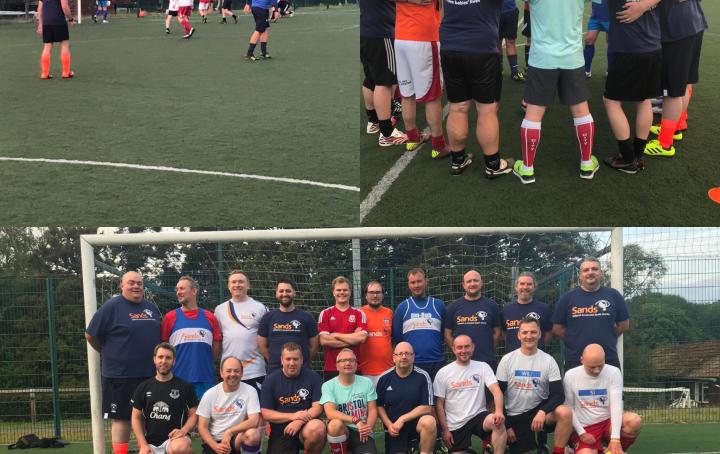 On a warm evening in early June, our football team 'Sands United Bristol Fc' held it's first training session. 18 dads turn up which was brilliant. We started off by gathering together for a moments silence to remember our babies - our shared reason for being there.

Training then got under way. Jim Williams very kindly took us through a few drills. The first couple of drills went ok with some silky passing skills on show. The final drill didn’t go quite as well - Jim thought it was a fairly easy drill but the rest of us tried our best to prove him wrong with someone commenting that ‘I bet 10 year olds nail this drill’

After that we played some 9 v 9 for about 40 minutes. Again there was some good skills on display and everyone there really put a lot of effort into the evening. Once the session was over and everyone had shook hands we all agreed that it had been a great session and were eager for the next training session - although that might change depending on the aches and pains in the morning!!

Couple of awards for the night -

First injury - goes to Dan Lake who claimed a tight/pulled hamstring after the five minute mark.

Pass of the night & goal of the night goes to John Wilford and not separately. John put in a cross that ended up lobbing the keeper and finding the net. For anyone else who tries it, the move has now been renamed as ‘doing a Wilford’.

The loudest sock/shoe combination award did have a bit of competition. Keith La Grange was in the running early in with his orange sock and orange and black show combo. However it was team manager Pete Byrom who stole the award away with his yellow shoe and orange sock combo. Nobody realised the lights had been turned off with the glow coming from Pete’s combo (below).

BBC Points West were also in attendance and filmed the session along with some of the dads who bravely shared their stories of loss. Pete Byrom and John Ross from the team were live in the studio on the Friday of the same week to talk more about the team. For anyone who'd like to watch the segment on Points West, here is the link -

Thank you to all who turned up and took part. Watch this space (and our social media pages) for more info and training session dates.

If you’ve been inspired to join the team and are a dad (or brother, uncle, cousin or grandad)who has suffered the loss of a baby before, during or shortly after birth then please get in touch through this page or email bristolsandsunitedfc2019@gmail.com