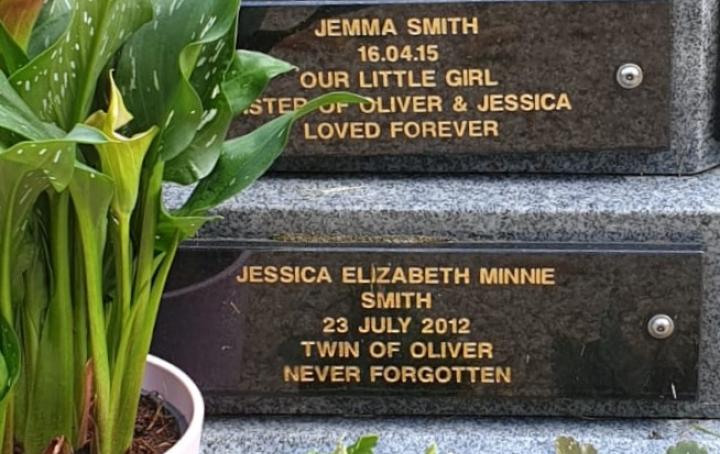 For day 2 of Baby Loss Awareness Week 2019, Anna who is a volunteer and committee member for Bristol Sands has bravely agreed to share the story of the loss of their 2 daughters.

We were so happy to discover I was pregnant with twins. It was a dream come true after a long and difficult journey to pregnancy. At 21 weeks I was told there was little amniotic fluid around twin 2. In the following weeks both babies grew, both had strong heart beats, and my hope for twin 2 grew with them. However this was completely quashed at 30 weeks, when a consultant told us Twin 1 and 2 would almost certainly go to full term, but twin 2 would die. The content and the delivery of this news made my breath feel it was going to stop. We lamely asked questions, but he could not predict if twin 2 would die immediately, hours, or days after delivery.

On the 23rd July 2012 Oliver and Jessica were born. Jessica died peacefully three and a half hours after their birth. Due to complications after the delivery no hand and foot prints were taken of Jessica. This fact still upsets me greatly, but we have lots of photos, and I will treasure the memory of Jessica and Oliver looking  directly at each other. We had warning we would lose one of our babies, but Jessica's death broke my heart. Our 'dream come true' had partly come true, and partly ended in a nightmare.

The days, weeks and months after their births I swung between such love and happiness for Oliver to a dark hole of grief and loss. Very few people could accept or allow this dark hole of grief because ' I was so lucky to have Oliver', which of course I knew, but there were and still are so many times I want to yell and scream that I had also had a daughter and she had died, so let me grieve. I felt so alone, so the Sands empathic helpline and the signposting to local support groups  was a great comfort.

Another emotional journey and I became pregnant again. Happiness and hope. When I was seven and a half months pregnant I felt unwell, but I put it down to a insignificant virus. However over the next couple of days I continued to feel unwell and became aware that I had not felt our baby move. I went to the hospital alone, having convinced myself I was making a fuss. I showed my swollen abdomen to the midwife and waited for the cold jelly. I lay so still as the probe scanned over my tummy, willing the sound of a heartbeat to break the silence, but there was only silence filling the room.  Eventually the midwife looked at me and said the words that no one should hear ' I'm so sorry, there is no heartbeat'.  A howling noise came out of me. I curled myself in to a foetal position, rocking, and begging there had been a mistake. People came in and out of the room, strangers holding my hand, saying they were sorry. I had to call my husband Martin and break the devastating news  that we had lost another baby. I remember saying 'I'm so sorry' repeatedly.  I blamed myself. It must be my fault, I must have done something wrong, I was being punished for something, because how could it be possible to lose one baby, let alone two. I had failed. Telling people I found so hard. I could not cope with their grief on top of ours. The waves of grief affecting so many others around us.

Jemma was born on the 16.04.2015. We looked at our baby girl. I was broken. Writing this now, a number of years after, I feel there is a part of me which will always be broken, but like with any grief, we learn to live with it, ride the waves,  and move forwards. I have moved forwards, and my love for Oliver, my husband, family and friends have helped hugely. I can now see so much beauty in the world and the people around me.

If you are reading this, and have suffered the loss of a baby, there is light after the blackness. Support from friends and family is very important, but the support from others who know the pain of losing a baby is invaluable.