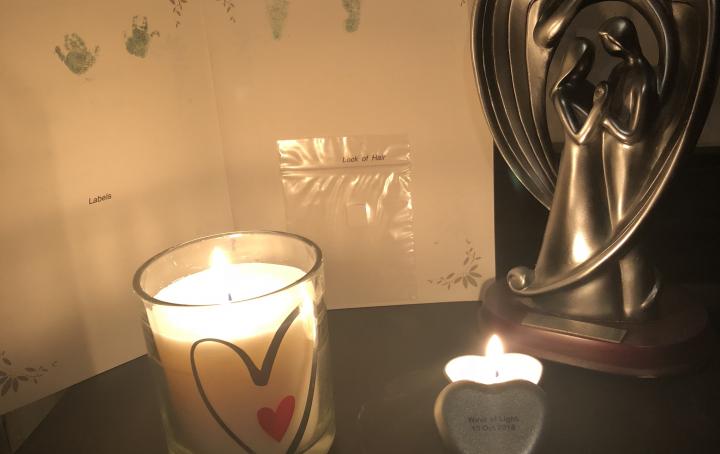 This week during Baby Loss Awareness Week we're highlighting the stories of as many groups of people as we can that can be affected by the loss of a baby. This week so far we've heard from a mother, a grandparent, the midwife and siblings. Today's story of loss is from the dads perspective. Bristol Sands befriender Peter Byrom shares his story of the loss of his first son Thomas.

'Your baby is dead' 4 words very coldly delivered by the doctor at Southmead Hospital that I felt ended our world. The darkness just seemed to envelope me and I stopped breathing as the pain of this news hit me. Although time felt like it stood still my mind was racing -

'This shouldn't be happening after what we've been through' my wife Denise had almost died at 17 weeks into the pregnancy so to get this far and for this to happen just wasn't right.

'I have to be strong for Denise' my being strong only last for a few seconds before I broke down in tears and Denise and I just held each other tightly.

'I've failed - I'm there to protect my baby and I've not been able to. I'VE FAILED' I spent a lot of time in the following weeks/months 'playing the tapes' over in my head of every little detail of the last few months to see if I'd missed something. Was there something I could have said to a doctor that would have changed the situation we're in now. The reality was that highly qualified doctors, nurses and midwifes couldn't have stopped this so what chance did I have.

We were 27 weeks into the pregnancy when we were delivered the devastating news that our baby had died. At this point we didn't know whether we were having a boy or a girl. The date was Friday 2nd January 2004. We chose to wait until after the weekend to return to Southmead hospital for Denise to be induced and deliver our baby. We returned to Southmead at 0900 on Monday 5th January 2004. That weekend had to have been the longest of our lives. We spent the weekend wondering around in a daze. With a list of questions but not sure who to ask. We didn't want to ring the hospital and trouble them as they'd be busy. We didn't know if we'd be allowed to take photos of our baby, we didn't know how our baby might look when they were delivered.

Eventually we found ourselves settled into one of the rooms on Central Delivery Suite and were waiting for labour to progress and for Denise to deliver our baby. Throughout the day the midwifes came in and out to check on Denise. The chaplain came in and chatted about what to do next - and arranged a funeral for our baby. All we could do now was sit and wait. I remember sitting there thinking and hoping that the doctors were wrong. Hoping that our baby would come out breathing. I knew they weren't wrong but privately I clung to that hope.

At just after 2100 that evening Denise delivered our baby. At the time we were on our own in the delivery suite so I was there to catch our baby as they came out. I remember carefully placing our baby onto the bed and going out to call for a midwife. I forget the name of the midwife who was looking after us at the time but she came in and very delicately handled our baby and spoke to them as she wrapped them up before telling us she'd take them away to clean up and to bring baby back into us. As she left the room I broke down again. Just big long sobs - I was in so much pain.

Denise had been amazing and delivered our baby, I'd briefly held our baby but despite my hopes that the doctors would be wrong - they weren't. It was all too much to take at that time for me after what we'd gone through in the last few months. Denise's mum had passed away suddenly when she was 12 weeks pregnant, 5 weeks later I'd nearly lost Denise but all the time our baby was growing and staying strong. It was a glimmer of hope and now we'd had that glimmer cruelly taken from us.

The midwife returned shortly carrying our baby in a small basket, wrapped up comfortably in a blanket. She told us the we had a son. A son we immediately called Thomas. We sat there for a while just holding his tiny basket. Just looking at Thomas in that moment I was filled with love for him. Despite what we were going through, those few moments were very calm and quiet and are moments I cherish.

Before we thought we'd told to hand him back (not realising we wouldn't be told that) we asked the midwife to come and take him from us. She very kindly bought in a little booklet with Thomas's hand and footprints and a couple of polaroid photos of him that we hold dear to this day. We then moved around to the Maple Suite. A room that is specifically for bereaved parents to use. It was here that our long journey began. Our journey to find a 'new normal'. We'd planned a 'normal' journey the involved Thomas - starting school, learning to drive etc. That normal wasn't possible anymore.

The next day we had a naming ceremony for Thomas in the hospital chapel. After a few days we left the Maple Suite Southmead and returned home. We spent a long time just sitting each other trying to figure out what had happened and why and what to do next. There were mornings I woke up thinking I'd had a really vivid nightmare about losing our baby and would turn over looking for the reassuring site of Denise's pregnant belly. After a few seconds it was a reassurance I realised I wouldn't see and that I hadn't had a nightmare, I was living one.

For months after I never accepted or realised that I was a dad. It wasn't until a few months later when we were on holiday in Boston and having tea at our hotel that I was made to realise I was a dad by my amazing wife Denise. She asked me what time it was. I looked at my watch and told her it was just gone 1900. She wanted to know what time it was back in the UK. So I told her it was just after midnight. 'Happy Fathers Day' she said as she slid an envelope across the table that had a hand made fathers day card in signed from her and Thomas. I then realised that I was a dad. A light had been turned on and for me a corner had been turned in navigating our way to a new normal.

'We are all part of a club that nobody wants to be a part of, but one that has the highest cost of membership.'